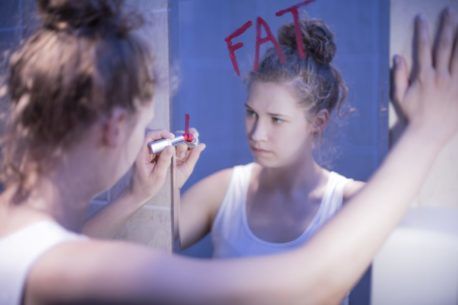 Anorexia (sometimes referred to as Anorexia Nervosa) is an eating disorder that is most commonly characterized by an inability or unwillingness to maintain a healthy body weight and an obsession with not gaining weight.  In most cases anorexia strikes teenage girls, though older women and occasionally men can suffer from it as well.  It is approximately 10 times more common in women than men.  Incidence of Anorexia has dramatically increased in recent years.  Some scientists identify powerful cultural and societal forces which are promoting unhealthy body image.

It is especially important for parents of teenagers, particularly teenage girls, to be alert to the onset of symptoms of Anorexia, as early treatment can be a significant factor in protection of future health and promotion of recovery.  Treatment typically consists of three phases: first, restoration—working to restore the anorexic individual to a healthy weight; second, therapy—focused on treatment of the underlying psychological issues that led to the problem; and third, modification—changing the behaviors and thinking that trigger anorexia.  In some cases medications are prescribed, which tends to focus more on increasing weight rather than treatment of the causes of the disease.  Patients who respond favorably to treatment tend to have the disease for less than two years.

Anorexia is a life-threatening condition that though it has received increased attention still lingers in silence.  In addition to serious weight loss, physical symptoms of anorexia can include intolerance of cold, growth of facial hair, swollen cheeks and swollen joints.  Behavior symptoms include excessive exercise, obsession with calories, unwillingness to eat with a family or group, baggy clothing and purging.  One of the difficulties parents often have in dealing with anorexics is the difference between their perceptions of their body and the reality.